RSS man arrested for attack on senior functionary in Nagpur

Two persons including a member of RSS have been arrested by police for a murderous attack on a senior RSS functionary in the city last month.
Mohan Agnihotri, a senior functionary of the city unit of RSS, was stabbed by two men on May 30 in Hasanbagh area here, when he was returning from the annual training camp of RSS underway at Reshimbagh.

Mr. Agnihotri was grievously injured, but survived.
Local unit of RSS had threatened to launch an agitation if the culprits were not arrested.
Police today said one Ganesh Shripatre, a member of RSS, had some enmity with Mr. Agnihotri over a loan application. Both worked at a co-operative bank whose management is considered to be close to the Sangh Parivar.
Shripatre allegedly hired the services of Anand Tambe, a notorious goon against whom a number of cases, including an attempt to murder Mr. Agnihotri, have been registered.
The two allegedly stabbed Mr. Agnihotri on May 30 evening.
After receiving a tip-off, police searched for Tambe, who was absconding. The record of calls to his mobile number led the police to Shripatre.
Both were arrested last evening, police said.
Posted by Marzook Ahamed at 5:18 AM No comments:

RJD on Sunday accused Baba Ramdev of being a front for RSS'activities and took exception to the reception given to the yoga guru by the government upon his arrival in the national capital last week.
"This is not how a sadhu should speak. The most dangerous thing is that the RSS is using the Baba as a front for its activities. They are trying to push him forward," the party chief Lalu Prasad Yadav told reporters in New Delhi.
"Sadhvi Ritambhara was the first one to share the stage (with Ramdev). She was the one who was responsible for the Babri Masjid demolition," he said.
The RJD chief said he had "no issue" with Ramdev entering politics and that "more than his saffron robes, white suits him better."

The former Railway Minister said he was "sad" that Ramdev was given a better reception than even US President Barack Obama.
He said, "The government realised that RSS is backing the Baba and that is why Pranab Mukherjee was sent."
Questioning Ramdev's 'satyagraha', he said, "If the deal was already finalised at the hotel, then what was the need for the fast. Will the Parliament work on the dictation of these people?"
Posted by Marzook Ahamed at 5:18 AM No comments:

Sharpening his attack on Baba Ramdev, Congress general secretary Digvijay Singh on Saturday dubbed his indefinite fast as a “five-star satyagraha” sponsored by Rashtriya Swayamsevak Sangh (RSS) and Vishwa Hindu Parishad (VHP) to divert people’s attention from “Sanghi terror”.
“Now it is absolutely clear as to what are the credentials of Baba Ramdev. He is now openly supported by RSS, BJP and VHP,” Mr. Singh told reporters.
He alleged that this campaign by VHP and RSS “is to undo the Constitution and Parliamentary democracy by encouraging people like Baba Ramdev to go on such fast.”
Alleging that the campaign is “totally engineered by RSS and VHP to divert people’s attention from Sanghi terror”, Mr. Singh wondered “what kind of satyagraha is this of a Baba who travels in a jet.”
“He has got five-star tents put up with all facilities. And he is doing ‘satyagraha’ on issues, which he doesn’t know,” Mr. Singh, who recently dubbed Baba Ramdev as being more of a businessman than a ‘sanyasi’, said. 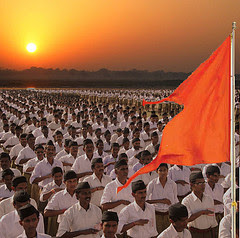 “The whole satyagraha is not something what the satyagraha Mahatma Gandhi meant. This is five—star satyagraha for which crores of rupees have been spent in creating air conditioned pandal,” he said.
Mr. Singh also took a dig at Anna Hazare who has announced plans to join Baba Ramdev in the fast tomorrow, saying, “I leave it to (his) judgement. Anna Hazare associates himself with RSS, VHP, I don’t know.”

The Congress leader, who has been speaking on the issue despite a virtual gag order, said that from day one everyone knows that “soldiers” of RSS, BJP and VHP are supporting Baba Ramdev.
Posted by Marzook Ahamed at 4:44 AM No comments:

LUCKNOW: Continuing with his anti-RSS diatribe, Congress general secretary Digvijay Singh created a flutter on Saturday by claiming that the Sangh Parivar engineered bomb explosions in the country to defame Muslims. "Muslim youths were arrested after every blast in the country but after the arrest of real culprits of Malegaon blasts, bomb explosions have stopped in the country," Singh alleged while addressing a rally at Mainpuri.
Singh, in fact, tried to kill several birds with one stone. While, accusing the saffron brigade of engineering communal tensions in the country, he launched a scathing attack on the BSP government on the issue of land acquisition of farmers, corruption, breakdown of law and order in the state. The rally was held especially for other backward classes, mainly Yadavs and Ghosis. The Mainpuri is stronghold ofSamajwadi Party. Singh also accused SP chief Mulayam Singh Yadav of being hand in glove with the RSS. He said that Yadav never criticised RSS, because he keeps his options open, so that support could be taken if required. He also alleged Yadav, Mayawati and BJP divided people on the lines of caste and religion. Singh said that corruption is at its peak in UP under Mayawati.

Posted by Marzook Ahamed at 1:31 AM No comments:

JAIPUR: A CBI court on Saturday rejected the bail application of Aseemanand alias Nabh Kumar Sarkaar who was arrested for his alleged involvement in the Ajmer Dargah bomb blast.

Aseemanand and other accused were produced before the CBI court in Jaipur on April 30 by NIA (National Investigation Agency).

The NIA has prayed for extension of time for filing the charge sheet against the main accused Aseemanand and the co-accused Bharat bhai.


Aseemanand has moved a bail application on the technical ground under section 167 (2) of Cr. P. C. which states that a person could not be detained more than 90 days in custody unless he/she had been chargesheeted. The application pleads that since the NIA had failed to investigate the matter and chargesheet him within the statutory period, Aseemanand should be granted bail.

Opposing the bail application, NIA contented that since the matter concerned with national security, the investigation could not be done hastily and as such the bail plea should be rejected. The court without expressing any opinion on the merits of the case dismissed the bail application.

The CBI court Jaipur was recently given charge of the trial in the cases to be prosecuted by the NIA, pursuant to which Aseemanand and Bharat bhai, accused of master-minding the October 11, 2006 Ajmer Dargha bomb blast, were produced in the court for extension of their judicial custody. The court extended their custody till May 14.

The NIA was handed over the investigation of Ajmer Dargha bomb blast by Hindu outfits on April 6, 2011. Previously the investigation was being undertaken by ATS, Rajasthan. The ATS has already chargsheeted Devendra Gupta, Lokesh Sharma alias Kaalo and Chandrasheker Levae before the Distirct Judge Ajmer.

However, Chandrasheker has been successful in obtaining bail from the high court. Two other accused Harshad Solanki and Mukesh Vaasaani have already been chargsheeted by NIA before the CBI court.
Posted by Marzook Ahamed at 10:33 AM 1 comment:

Assemanand to be grilled on Mecca blast case

JAIPUR: A special CBI court here has granted extension to NIA probing Ajmer Dargah blast in filing its chargesheets against accused Bharat Bhai Shah, and permission to the NIA, Hyderabad, to interrogate Swami Aseemanand in the Mecca Majjid blast case.

On the bail plea filed by Assemanand, the special CBI court had given May 6 as the fresh date for its hearing. The court also granted permission to National Investigation Agency, Hyderabad, to interrogate Aseemanand in jail here in the presence of his advocate regarding his alleged involvement in the 2007 Mecca Masjid blast.

Aseemanand, during the last hearing on April 30, moved a petition seeking bail on technical grounds citing Section 167 (2) of CRPC which states that a person cannot be kept in custody for more than 90 days during investigation especially when the investigative agency concerned has failed to file a chargesheet.

Posted by Marzook Ahamed at 10:32 AM No comments:

Opposing the plea of the accused that he has to appear for the fourth year engineering examinations at Kolhapur, the National Investigation Agency (NIA) investigating the case stated that the presence of the accused in custody is required.
The NIA further submitted that the engineering student had committed a grave offence by using his engineering skills to prepare a circuit for the bomb.
Posted by Marzook Ahamed at 10:28 AM No comments:

Banning the R.S.S and their branch terror groups will produce violence free India..?